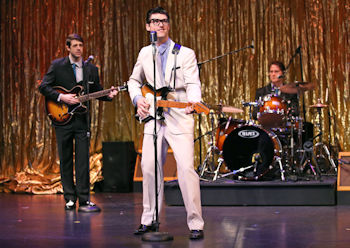 Buddy found a very welcome home in another London - the one in Ontario, Canada - in the spring of 2016, with an incredible production which received standing ovations at every performance of its four-week run!
Testimonial:

“Our Buddy production was a smashing success and an outstanding finale to our season. We had standing ovations every show, people up dancing through the last songs and some patrons returning four times to relive the memories. Young and old connected with the music and the story. We had so many great memories and stories that were shared with us throughout the four-week run. What a great way to show that theatre makes the world a better place”
— Deb Harvey, Executive Director, The Grand Theatre, London, Ontario

The Grand Theatre cast of Buddy

“It was one of the greatest tragedies in rock ‘n roll history, but it was a fun-filled, meteoric ride getting there… The Grand production of the popular show lives up to its billing as a play with music, the cast of 13 actor/musician/singers delivering strong performances that tell the story with clarity and an awful lot of fun.

“Zachary Stevenson is inspiring in the lead role of the heavily bespectacled Buddy Holly, his competent guitar work, physicality and characterizations of the legend providing strong support to vocals that are outstanding… Stevenson is so comfortable, so focused and so believable as Holly, lovers of rock ’n roll, music history or Buddy Holly should run to buy tickets. He’s that good. 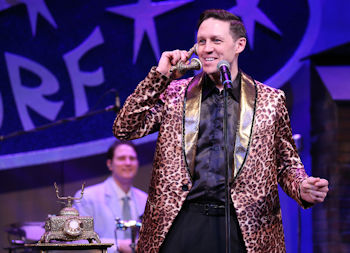 Kevin Aichele as the Big Bopper 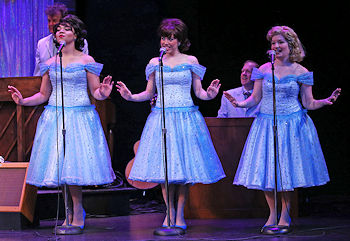 (L-R) Olivia Sinclair-Brisbane, Dianne Oliveira, and Andrea Ferrett in the Grand Theatre’s production of Buddy
“Although many in the supporting cast have only a few years of stage experience, they give great performances that capture the excitement, fun and youthful energy of the 1950s, especially former Londoner Oscar Moreno, a High School Project alumni, who plays Ritchie Valens. 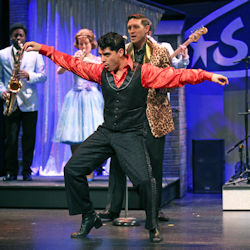 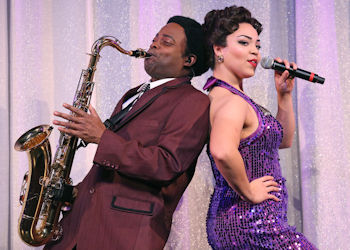 Michael Clarke and Olivia Sinclair-Brisbane at the Apollo

“Those are just two of the moments that delighted the audience. There were many others, not the least of which was Holly cuddling on a couch with his wife, Maria Elena (Dianne Oliveira), playing “a song I’ve been working (that) I wrote for you” on acoustic guitar, a note-for-note perfect ‘True Love Ways’.

“This is a show where the musical director, Bob Foster (who plays guitar and keyboards), is as deserving of a standing ovation as anyone in the cast, if only for the arrangement of ‘Raining in My Heart’.

“This is director Susan Ferley’s last show as artistic director (she’s directing High School Project’s Les Miserables in September before heading to England to study at the prestigious Royal Central School of Speech & Drama) and the audience couldn’t ask for a better end to the season, or her reign.

“The show is perfectly paced, giving the audience a chance to absorb all the nuances this show was written to reveal, the naivety of the young musicians, the sleazy record producers and companies who prey on them, the pressures and conflicts musicians faced and the influence Holly had on the musical landscape. You can hear The Beatles, The Stones and others in Holly’s music.

“Buddy – The Story of Buddy Holly is appropriate for all ages, a must-see show that will not disappoint.”
— Joe Belanger, The London Free Press **** 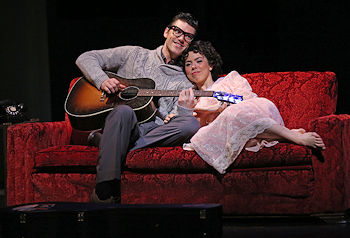 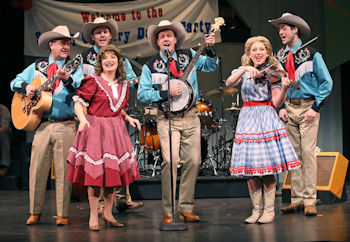