“It’s no surprise that the John W. Engeman Theater’s production of Buddy–The Buddy Holly Story received a standing ovation from the audience during its Jan. 19 showing, as cast members kept the crowd moving and singing to the songs from start to finish.

“Audience member Teresa Oliver, of Huntington, said this is a production that can’t be missed. “Everything was excellent,” she said. “It got everybody moving, everybody dancing, and everybody was getting involved. I loved it”. Audience member Frank Carino Jr., of Huntington, said the cast’s interaction with the crowd was awesome and everyone from his group “lost their voices during the show.”

““It was definitely an entertaining evening for all age groups,” Carino said. “It was honestly better than some of the Broadway shows I’ve seen, hands down.”

“Engeman’s production is directed and choreographed by Keith Andrews, with musical direction by Angela C. Howell... During the production’s electrifying finale, which features Buddy’s “Johnny B. Goode,” Ritchie Valens’ (Diego Guevara) “La Bamba” and The Big Bopper’s (Jayson Elliot) “Chantilly Lace,” the energy from the audience was in full force, singing, clapping and dancing to each number. 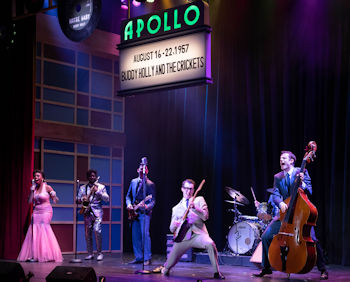 BWW Review: BUDDY – THE BUDDY HOLLY STORY at the Engeman

“Northport’s exquisite John W. Engeman Theatre does it again with a boffo incarnation of Buddy – The Buddy Holly Story. Running through March 3rd at the Long Island venue, the musical is strongly directed by Keith Andrews and boasts an absolutely stellar cast many of whom have been in previous productions of this show. While we know Buddy (along with a few of his friends) died young and tragically in a plane crash, Alan Janes has certainly created a joyous celebration of Buddy’s life.

“The award-winning show has had a very extensive life originating in the West End in 1989 running there until 2008. It was on Broadway from 1990 to 1991 and has toured and been done locally, regionally, and worldwide ever since. In the Engeman’s production, Michael Perrie, Jr. excellently stars as the rock and roll pioneer. You will find he is a natural in the role as he belts out some of Buddy’s biggest hits including “Peggy Sue”, “That’ll Be The Day”, and “Maybe Baby” among many others.

“The show is well thought out having the first act (and a little of the second act) set over several years telling the story about how Buddy started with his band, The Crickets, and the pressures of the music industry as he and the band wanted to move from country to rock-and-roll. It also shows him meeting his wife, Maria Elena portrayed adorably by Lauren Cosio, and the band recording. Then most of the second act shows their final performance at Surf Ballroom in Iowa. It is truly one big party as we also see performances by The Big Bopper, portrayed by the delightfully charismatic Jayson Elliot, and Ritchie Valens, portrayed charmingly by Diego Guevara.

“The whole company is truly brilliant as is the clever creative team. Jordan Janota’s set is smartly stationary with some rolling pieces that make for flawless scene changes. This is enhanced beautifully by Doug Harry‘s atmospheric lighting and Dustin Cross‘ great costume choices as we are in the late 1950s. It is also thrilling to see that the enthusiastic audience was also into the participation aspect.

“And so, Buddy – The Buddy Holly Story, is indeed another hit for the Engeman. I am certain that, even if you are not overly familiar with Buddy Holly‘s music, you will have a wonderful time. And his fans I am sure are elated this production honors him so beautifully. Being an old soul myself, I think it is safe to say you will be happy to have seen this must-see production this season.”
–Melissa Giordano, Broadway World 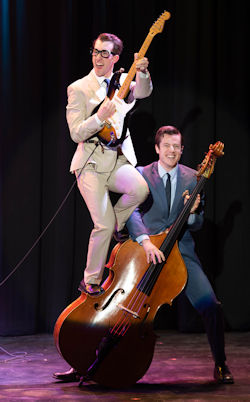 A ’50s legend brought back to life

“It’s a blast from the past. Buddy — The Buddy Holly Story at the John W. Engeman Theater in Northport is a rollicking celebration of the iconic singer...

“Watching Michael Perrie Jr. in the title role is as close as many of us will ever come to seeing the legend live, no surprise since he’s been performing the show off and on since 2016. Rarely offstage, Perrie is perpetual motion from the moment he launches into the early hit “That’ll Be the Day”...

“Director-choreographer Keith Andrews has assembled quite the backup bunch, starting with the other two members of Holly’s band — drummer Jerry Allison (Armando Gutierrez) and Joe Maudlin (Sam Sherwood), the bass player whose aerobic routine on the massive instrument brings down the house. (Note the actors in this show are the band, with pretty much everyone playing something.)

“Other notable performances include Jayson Elliott as J.P. Richardson Jr., known as the Big Bopper, Diego Guevara as the hip-shaking Richie Valens and Eric Scott Anthony as Norman Petty, the producer whose tough love helped Holly reach the top. Costumer Dustin Cross does everyone up in ’50s finery — lots of crinolines and cardigans — and Jordan Janoda’s colorful set evokes the era...

“Most everyone leaves singing, but you can’t help wonder what might have been had Holly listened to his wife and never gotten on that plane.”
–Barbara Schuler, Newsday 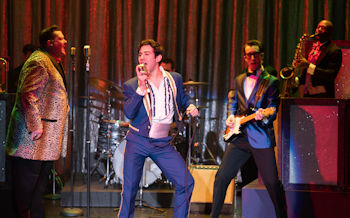 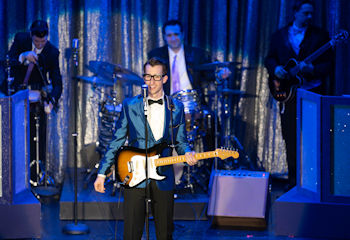 “...The impressive sets by Jordan Janota and props by Emily Wright beautifully evolve with each scene while the stage features a permanent arch of gramophone records that light up individually as each hit is performed. Touring the country in 1957, Holly and his band head to the Apollo Theater in Harlem where the audience is treated to a show-stopping rendition of the Isley Brothers’s “Shout” by Apollo performers Marlena (Kim Onah) and Tyrone (Troy Valjean Rucker) before enjoying “Peggy Sue,” “Oh, Boy!” and “Not Fade Away”...

“The final scene is also one of the show’s finest as Holly’s last performance at the Surf Ballroom in Clear Lake, Iowa, with J.P. “The Big Bopper” Richardson (Jayson Elliott) and Ritchie Valens (Diego Guevara) is recreated in a poignant tribute. The audience is transported back in time and become concertgoers enjoying outstanding performances of “Chantilly Lace,” “La Bamba” and “Peggy Sue Got Married”... bringing the packed house at last Friday’s show to their feet in a long-standing ovation.”
–Heidi Sutton, Times of Huntington-Northport Review 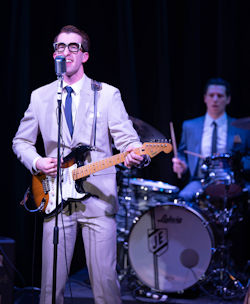 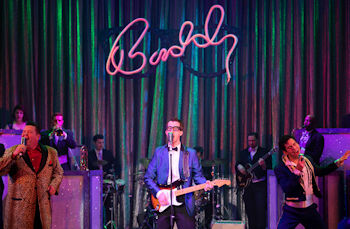 “Buddy - The Buddy Holly Story premiered as the mainstage performance at the John W. Engeman Theater in Northport this past weekend to packed houses! These enthusiastic theater goers were ready to celebrate the life and work of an artist who was taken from us way too soon. Masterfully directed and choreographed by Keith Andrews, and developed beautifully by Music Director Angela C. Howell, this show promises big names, big songs, and a big night of entertainment - and it delivers!…ending in a spellbinding explosion of music and flair!”
“...This show is indeed a celebration of a man who left his mark on the music industry, as well as in the hearts and minds of those who hear his voice. Although Buddy Holly’s career only lasted a short while, he left the world with masterpieces of expression which truly transcend time...

“This show is full of light, love, excitement, and celebration! Act II itself becomes a concert in its final scene, and audience members rise to their feet for a standing ovation after truly astounding musical performances of “Shout,” “Chantilly Lace,” “La Bamba,” and “Johnny B. Goode,” only to have the show go on with a reprise of “Oh Boy” as we are on our feet - cementing that concert feel and offering a final moment to enjoy the celebration that this play is offering. This show is all you hope it will be - and much more! The songs and lifelike performances will leave your head swimming and your heart full. Full of respect for a dynamo who left his mark on us all with a treasure trove of music which will continue to entertain and inspire for generations to come!”
–Jessica Kennedy, The Theatre Guide Review 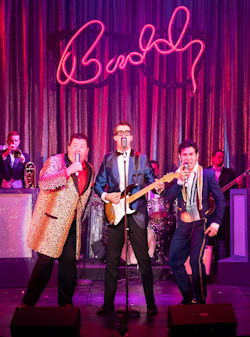 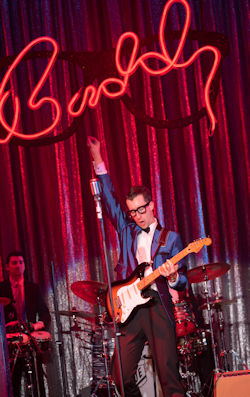