Buffalo, NY
Billy is an accomplished multi-instrumentalist and actor, who played Jerry Allison in the 2008 and '09 MusicalFare productions of Buddy in Amherst, NY.

Billy played Jerry Allison in the 2008/2009 MusicalFare production of Buddy in Amherst, NY. The production became the best selling show in the theatre's history and due to public demand (and rave reviews) was remounted in summer 2009 at MusicalFare - the biggest musical producer in Western New York. 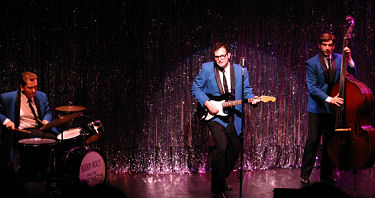 An accomplished multi-instrumentalist and actor, Billy appeared off-Broadway in the debut of RPG at Manhattan Rep, and the New Jersey premier of Hedwig and the Angry Inch. In the Buffalo area he has been seen in Evita, Man of La Mancha, The Rocky Horror Show, Twelfth Night, Picasso at the Lapin Agile and The Glass Menagerie. In addition to his acting work, he is also the frontman of the national touring rock band Billy Draws Two.