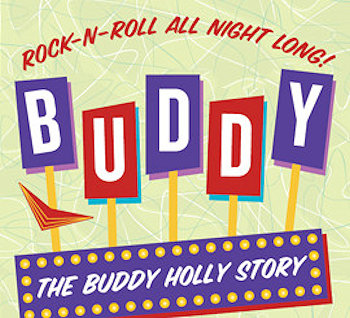 Due to the tremendous audience response from its 2012 production, Jacksonville's Alhambra Dinner Theatre brought the show back in 2015, delighting patrons once again!
Review (2015):
“Alhambra patrons have responded with sellout houses to this season’s holiday offerings, which included both Buddy’s Rock and Roll epic, and the colorful White Christmas... The Alhambra’s New Year’s Eve audience loved the songs, filled with warmth and infectious melodies.

“Dalen Gunn is fabulous as Buddy Holly. He not only looks like Holly but wears his initial geekiness on his sleeve like Holly and sounds like him when he sings. Gunn captures Holly’s ability to wrap himself in a song and make it his own. As he sings hit after hit with his rich polished voice, the songs feel as fresh as the day they were penned. And despite the fact that these songs are over fifty years old, the Alhambra audience responded wholeheartedly to the music, a savory stew of Rock and Roll roots... The splendidly matched ensemble, cast by Director/Producer Tod Booth, is a strong theatrical and musical team.

“Don’t miss this unique musical, one of the earliest and one of the best of the jukebox musicals. It offers a moving showcase…”
- EU Jacksonville (Jacksonville, FL) 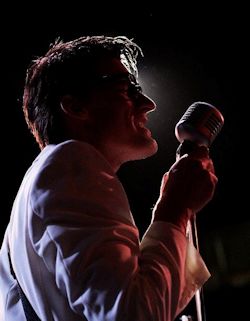 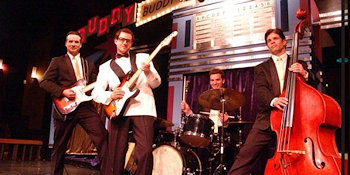 ...while Todd Meredith (centre) donned the specs in 2012
For more information click here