A spectacular setting in southwest Utah hosted a fabulous production of Buddy at the Tuacahn Center's indoor Hafen Theatre over eight weeks in the summer of 2022.
Review:
TUACAHN’S ‘THE BUDDY HOLLY STORY’: A ROCK PIONEER COMES ROARING BACK TO LIFE (abridged)

“If you had to choose one rock-n-roll star whose life was cut short and whose potential legacy could have had the most impact had he lived, you’d be hard-pressed to not select Charles Hardin Holley, or as we know him, Buddy Holly…

“Having seen the jukebox musical of his life in its earliest incarnation at London’s West End back in the early '90s, I can say its arrival here is long overdue, and it should thrill audiences much the same way that Million Dollar Quartet has over the past few years… 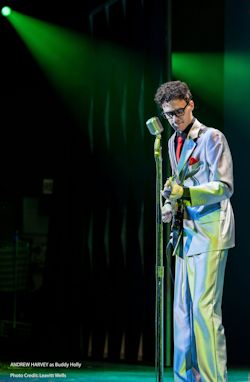 “Holly is wonderfully depicted in both vocal style and manner by Andrew Harvey and is energetically (or in some cases acrobatically!) backed up by the excellent musicianship of bass player Joe Mauldin (Roy Brown) and drummer Jerry Allison (Ken Sandberg).
“But it isn’t fair to single out only a few musicians, because the entire cast is filled with amazing voices and skilled multi-instrumentalists. Under the direction of Angela C. Howell (who gets stage time too), the venue turns into a jam-session party of timeless classics including “Not Fade Away,” “Peggy Sue,” “Oh Boy,” and “Rave On.” 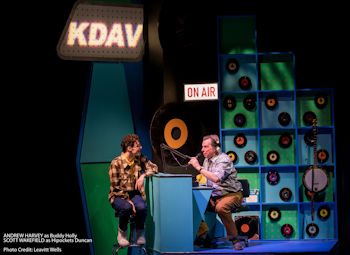 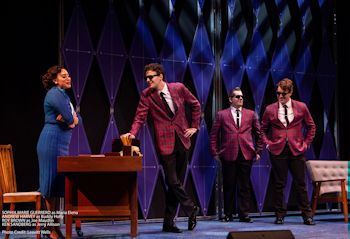 “Perhaps most effective are the show’s tender moments, especially Harvey’s moving interpretations of “Everyday” and “Words of Love,” inspired by his at-first-sight romance and then first-date marriage proposal to Maria Elena (Sophia Marie Guerrero)…

“…One aspect the show gets perfectly right is Holly’s fateful final concert in Clear Lake, Iowa where he is joined on stage by fellow Winter Dance Party tour artists the Big Bopper (Jayson Elliot) and Ritchie Valens (Estevan Hernandez), both of whom electrify the audience. It’s an iconic moment deftly portrayed here with tragic beauty. 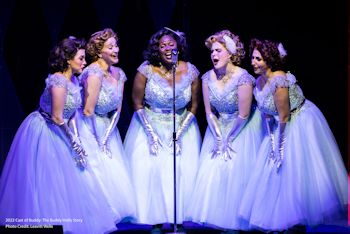 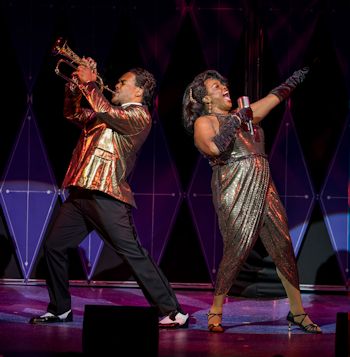 Tyrone (Justin Marriel Boyd) and Marlena (Jannie Jones)
“Director-Choreographer Keith Andrews and crew have balanced wonderfully the nostalgic celebration of Holly’s immense impact and combined that with a superbly talented cast to depict the tender realization of the void created by Holly’s premature passing at such a young age.
“Tuacahn’s Buddy - The Buddy Holly Story serves as a welcomed examination of a singular rock-n-roll pioneer, and a fun tribute concert that tugs at the heartstrings at all the right moments.”
— Bruce Bennett, St. George News 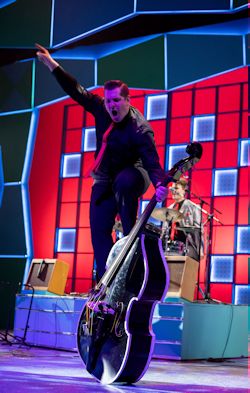 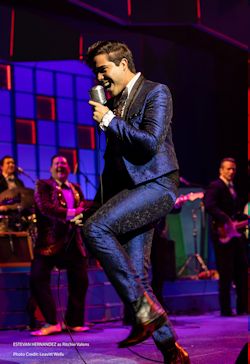 Audience comments:
“It was absolutely spectacular! The best musical by far we've ever been to. And we have been to a lot in our 44-year marriage. Kudos to the amazing cast - thanks so much for the best night of entertainment”

“I saw the Buddy - The Buddy Holly Story on Broadway three times and went back for a fourth but it had closed after a couple of years of playing. I gave it a 10 out of 10 because of the great sound system and because the instrumentalists played the music just as I remember it. I also saw it at a local production in New Jersey but gave it a 5 rating because of the facilities and the quality of the music. Two nights ago I saw the show at Tuachan and I gave it a 9.5 rating because of the excellence of the players and the settings. It would be well worth seeing again! The final concert was outstanding and involved the audience as if we were part of the play. Way to go Tuachan!!” 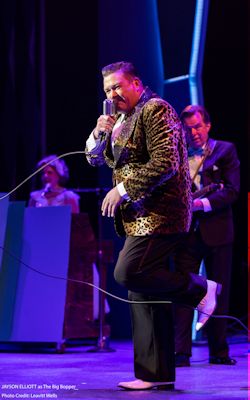 “Beautiful show! Music was magnificent. I would come see the show again, need to find a date. I enjoyed every minute of it. All so talented - thank you for coming to Utah”
“We loved the show. We are both retired entertainers. My wife was a Rockette and I was a Vegas strip headliner and Broadway entertainer. We have seen hundreds of shows and this is among the best. CONGRATS”

“My daughter and I attended the June 30 performance and are still just plain high on the excitement! What a marvellous production! Every single cast member was simply amazing. I hope I wasn’t a total annoyance for my section-mates or especially the cast, because my blood cranks into overdrive with the energy of Buddy’s music” 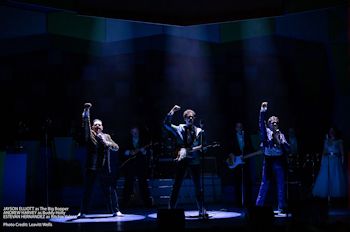 “Wow. Really fabulous time. Great music. Great story. Great singing and great acting. Hope you bring Buddy back again for encore!”
“You need to go see this show! One of the best I have seen at Tuacahn. All the performers are excellent and so very talented. We enjoyed every minute of it. Hope to be able to see Jannie Jones in future productions”

“The Buddy show was awesome! The talent and hard work of the cast shows. They played multiple roles & multiple instruments. I want to see it again!”
For more information click here