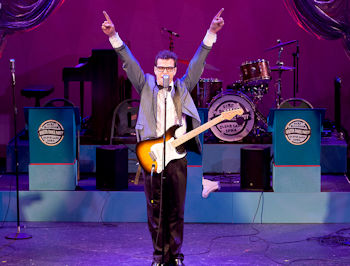 Bill Hanney's Theatre By The Sea in Rhode Island produced Buddy in summer 2016, with a spectacular production that had audiences on their feet, dancing and clapping, over three record-breaking weeks!
Testimonial:

“We broke all records with this show! The audience couldn’t get to their feet quick enough! We can’t wait to do this at our other theatre”
— Kevin P. Hill, Artistic Director, Theatre By The Sea / North Shore Music Theatre

“(With) audience members literally dancing in the aisles – the show is upbeat, rocking good fun… Michael Siktberg is perfectly cast as Holly, from his vocal inflections to how well he pulls off those iconic nerd glasses... and the other principal and supporting characters are just as great. Ensemble member Shalya Simmons comes on stage in a couple of different roles, but she brought down the house with her performance of 'Shout' while playing a singer at the Apollo Theater… John-Pierre Ferragamo and Albert Jennings are well chosen to represent, respectively, The Big Bopper and Valens, and the ensemble as well as the actors playing The Crickets really bring the entire show together… Overall, Buddy is upbeat, fun and a nostalgic nod to when rock and roll was just getting traction in America. Even if you’re not a child of the 1950s, the music should be familiar and you’re going to enjoy listening to hits like 'Peggy Sue', especially after they give you some of the back story behind that one”
— Kimberly Harper, WPRO News Talk 630

“Theatre By the Sea (TBTS) in Wakefield, RI (I would have thought Matunuck) opens its season with a rousing version of BUDDY - THE BUDDY HOLLY STORY… the musical hews more closely to Holly's actual life story than the 1978 film version, which starred Gary Busey… this show is unbelievably entertaining when the actors are singing. Michael Siktberg as Holly seemed to grow into the role right before our eyes. By the time he takes the stage of the Apollo Theater in Harlem with his back-up group the Crickets (Seth Eisler, Sam Sherwood, and Michael Perrie Jr.) at the conclusion of Act 1, Siktberg was in complete, full-on Holly, as Holly was in full-on rock star. (Shayla Simmons') show-starting version of the Isley Brother's 'Shout'... From my vantage point, I could see into the wings, and Simmons had the stagehands dancing. It made you wanna shout! 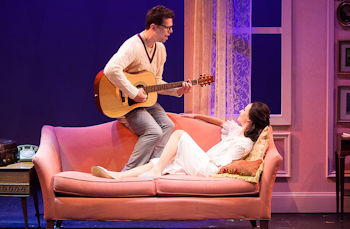 “The second act also has a rock'em-sock'em finish, a recreation of Holly's last concert in Clear Lake, Iowa. Sikberg continues his excellence, but now the vastly entertaining Big Bopper (Jean Pierre Ferragama) and Ritchie Valens (Alber Jennings) join him with crazy good versions of 'Chantilly Lace' and 'LaBamba', respectively. They in turn join Siktberg's Holly in Chuck Berry's 'Johnny B. Goode', which had the audience dancing in the seats… This is a very professional production with excellent musical talent and production values. Go see it.”
— Larry O’Brien, BroadwayWorld.com

“Theatre By The Sea's 'Buddy Holly' A Sizzling Night Of Rock”
“The cast not only acts and sings, but each actor plays his own instrument. And they're great - tight, polished and able to capture the freshness of Holly's music. Michael Siktberg is fabulous as Holly. He's got the looks, the voice and the guitar chops to carry the night. But there were also terrific performances from Theatre By The Sea favorite Jean-Pierre Ferragamo as The Big Bopper, and a smoking rendition of 'Shout' from Shayla Simmons that had audience members standing and cheering… It's nice to see that Theatre By The Sea has kicked off its season with such a strong showing… It's an upbeat, joyous tribute to one of the great pioneers of rock.

“Of course, Boomers who grew up in the 1950s will love this music. But this is the kind of show, a seamless, high-revving evening, that will appeal to anyone who goes for great music”
— Channing Gray, Providence Journal 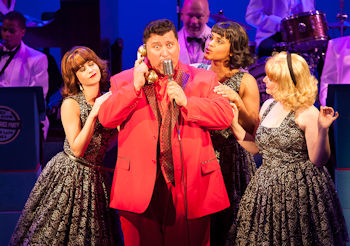 “Buddy is a blast to the past”
“...if the enthusiastic reaction from the opening night crowd is any indication, this production will be an early smash hit… things got white hot inside… by the end of the show, most of the spectators were on their feet, dancing and clapping along to the sounds of the rock ‘n’ roll era… this show has an advantage over standard jukebox musical fare in that there is a compelling narrative through-line tracing Holly’s brief but brilliant career… There is a lot to like about this fun, upbeat show… Judging by the exuberant response from the opening night audience, this is a show that is tailor-made for Boomer types with affectionate memories of the early rock ‘n’ roll era, but also for music lovers who appreciate Holly’s historic impact on rock music. If this sounds like you, get your tickets soon as they are selling out fast”
— Brad Hevenor, The Independent, Rhode Island

“If you are a fan of the music of the ’50s, this is a show not to be missed… Stick around for a rockin’ encore”
— Don Fowler, Warwick Beacon 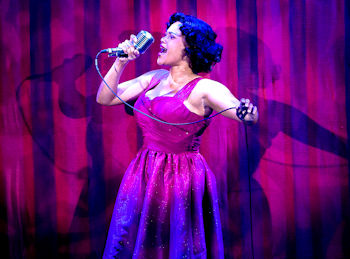