Cincinnati, OH
Jennie is an accomplished actress and pianist, and most recently played Vi Petty in Allenberry Playhouse's (PA) production of Buddy in fall 2011.

An accomplished actress and pianist, Jennie most recently appeared as Vi Petty and a Hayrider in Buddy at Allenberry Playhouse (Boiling Springs, PA) in the fall of 2011.

She earned a Bachelor of Music in Voice and Piano from Ohio University, and has performed pre-show entertainment for the Cincinnati Opera. 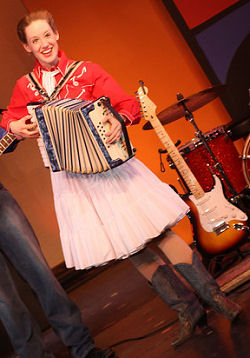 Jennie performing with the 'Hayriders' in Buddy at Allenberry Playhouse

Jennie has travelled the U.S. performing with many companies, including Nebraska Theatre Caravan's National Tour of A Christmas Carol, and South Eastern Tours of both Smoke on the Mountain and Sanders Family Christmas with Cumberland County Playhouse. Her additional regional credits include Wayside Theatre, Fireside Theatre, Beef and Boards, Granbury Opera House, and Cincinnati Opera. 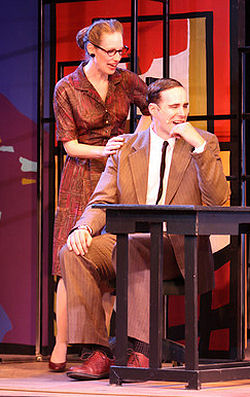 Jennie (L - above and below) as Vi Petty (Allenberry Playhouse) 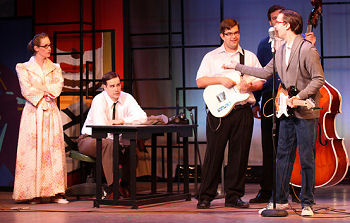 In addition to stage work, she is also a professional steel drummer with the Bacchanal Steel Band. Recent gigs include opening for the Beach Boys in the summer of 2010, and playing aboard Asuka Cruise (NYK Cruises, Japan). Jennie can also be seen in film and television, most recently as an extra in the Hollywood independent feature film Tan Lines, in theatres in 2012. 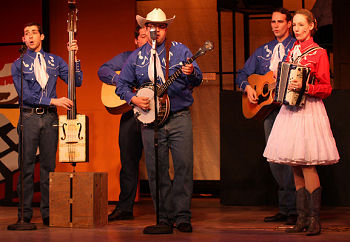