Chicago, IL / Appleton, WI
James has performed in regional theatre across the U.S., and will be playing the Big Bopper in the History Theatre (St. Paul, MN) production of Buddy in the fall of 2009.

Originally from Wisconsin, James has performed in regional theatre across the U.S. since 2005. He played the Big Bopper (J.P. Richardson) in the celebrated production of Buddy at Circa '21 Dinner Playhouse in 2008, and reprises the role at the History Theatre, St. Paul, this fall. James has also had the pleasure of performing as the Big Bopper in the Bopper's home state of Texas, to critical acclaim. 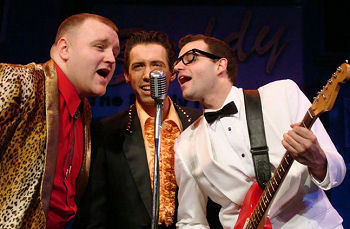 James Fairchild (L) performing as the Big Bopper in Buddy