Following its triumphant (and record-breaking) run of Buddy in 2012, Globe Theatre brought the show back to Regina in early 2018 - this time to play the larger Casino Regina Show Lounge.
Testimonial:

“The show was very well received, and we have heard nothing but glowing responses”
— Steven Balkwill, Director of Production, Globe Theatre, Regina, Saskatchewan 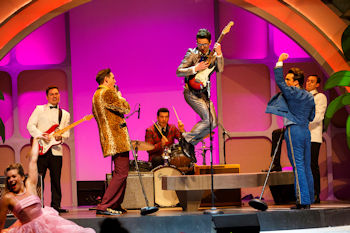 The musical was a huge hit in 2012 when it was presented at Globe’s theatre in the round, playing to 94.5 per cent capacity over its run of 57 performances.

On Tuesday night the latest production opened at the Casino Regina Show Lounge and while it did have some differences in staging, the musical matched the heart and joy of its predecessor.

Directed by Danny Balkwill, who was a cast member in the 2012 production, the musical took to the proscenium style stage to tell the story of Buddy Holly. Written by Alan Janes, the jukebox musical follows the 18 months from Holly becoming a rock and roll superstar to his tragic death in a plane crash on Feb. 3, 1959.

It’s a remarkable story — a young man from Lubbock, Tex., follows his heart to play his music the way he wants it played, resulting in incredible success which was abruptly ended by the accident. Such a production has a responsibility to honour Holly properly and this production does exactly that. 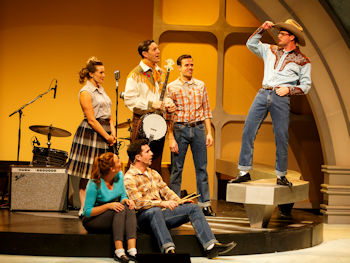 Al Braatz is superb in the leading role. He looks like Holly and even better, he sounds like Holly. Only minutes into the production, patrons had no difficulty believing that he was Buddy Holly, a belief that allowed the musical to move forward rather easily.

While Braatz stood out with hits like That’ll Be The Day, Peggy Sue and Rave On, his renditions of Everyday, in the first act, and True Love Ways, in the second act, were beyond expectations. His acoustic version of True Love Way was wonderful in its simplicity.

Braatz wasn’t alone in bringing skill to the stage. The cast was fantastic and was up to the task of the demanding production. They all played multiple characters and even more impressively, played all the instruments in the production. From the early scenes featuring country music and instruments like the mandolin and banjo to the full rock tunes using keyboards and a horn section, the production benefitted greatly from the musical talent of the cast... 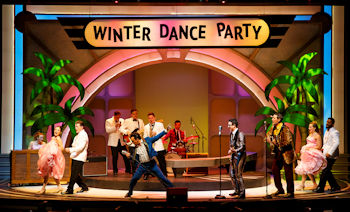 ...Another contributing factor to the success of the show is the venue. The proscenium stage provided the crew with significant opportunities to make the production its own and that’s what happened. The staging was big, bold and bright and easily shifted from an auditorium in Lubbock to the Apollo Theater in Harlem to Holly’s apartment in New York City... 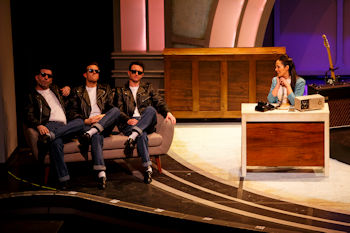