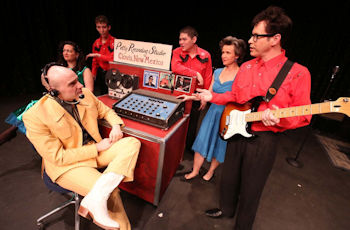 “(William G.) Wright is the actor tasked with bringing Buddy Holly to life in the Fairbanks Drama Association’s production of Buddy - The Buddy Holly Story, running weekends at the Hap Ryder Riverfront Theatre and directed by the theater’s managing director, Peggy Ferguson. He’s in almost every scene… juggling quick costume changes while bringing Holly’s songs, sound and looks to the stage. Despite the age difference — Wright is older in real life than the young Holly who died at age 22 — he’s given the theater a musical hit with his portrayal of the idealistic young rocker who changed the definition of rock ‘n roll.

“Unlike past drama association musicals (Smokey Joe’s Cafe, Ring of Fire), The Buddy Holly Story is a musical play rather than a strict revue, and this works in the theater’s favor. The actors get in-depth lines, smart staging and character growth, and we, the audience, get an evolving storyline highlighting Holly’s life.

“Wright’s portrayal of Holly commands the stage, and he plays the singer well and with ease. Wright is a stage veteran, and his expertise helps lead some of the younger cast he works with. With his curly pompadour and characteristic glasses, he’s convincing both vocally and visually as Holly. A catalog of 14 Holly hits are showcased in the production by live musicians performing on stage. On opening night, the musicians wowed the crowd and were as appreciated as much as Wright’s performance. 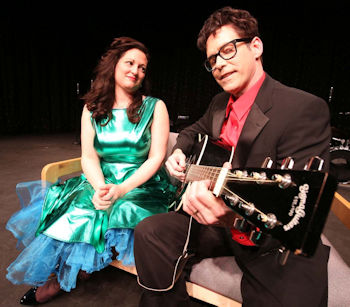 “Joining Wright on stage are a handful of supporting actors who beam in their smaller roles. Amanda Hanson makes her Fairbanks Drama Association debut as Maria Elena Santiago, Holly’s wife, and she carries scenes with ease as if it’s her 100th FDA production. Other notables who lift the production include FDA veterans By Valentine as Vi Petty and Kalesha Pearson as the Apollo’s Marlena, as well as Fairbanks theater newcomer Willie Blackburn as the Apollo’s Cyrus. Hanson, Valentine, Pearson and Blackburn are all standouts in their supporting roles, and they leave you wanting a little more of them on stage.

“Conversely, the Crickets (James Hoodecheck as Joe B. Mauldin and Andrew Sheets as drummer Jerry Allison) are younger than you would expect rockers of the era to be, and Chris Malen’s Big Bopper and Kevin Joseph Zayas’ Ritchie Valens are enthusiastically energetic...

“The storyline includes more than its share of humor and laugh-out-loud moments, even during several scenes that touch on race relations of the time — Holly’s marriage to Maria Elena Santiago is not viewed favorably by his family and record executives because of her heritage, and there’s a moment of surprise when Apollo singers find out Buddy Holly and the Crickets are, indeed, white. The script uses humor to deal with these moments, but it reminds the audience that racial tensions were even more prominent a topic in the late 1950s than they are in 2016. When today’s political leaders say they want to make America great again, this is not the era they are referencing.

“Musically, the entire production is solid. Music director and guitarist Todd Wienke, no stranger to the melodic stages of Fairbanks, leads a talented group of fellow musicians, including the Crickets, in their various scenes. Any time you put a live band on stage with actors, you need to know what you’re doing, and director Ferguson has made that work here. The band and actors are in sync, and they are at their best when they’re performing as one. Costumer Summerdawn Hartford also has stepped up, easily capturing the attire of the era.

“Unlike a lot of theatrical productions, there is no subversive hidden message here in the telling of Buddy Holly’s life other than a theme along the lines of staying true to yourself. What the cast, crew, singers and musicians have done here is stay true to the music of Buddy Holly, ever immortalizing the singer even further.” 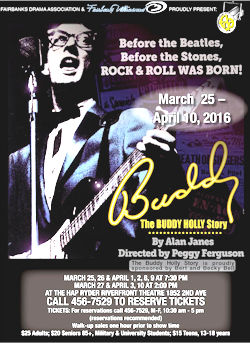