Cincinnati audiences enjoyed a rousing few weeks of Buddy in early 2020; a production the incredibly talented cast hit literally out of the park!
Reviews (abridged):
‘'BUDDY HOLLY STORY' A ROUSING HOMAGE TO ROCK ‘N’ ROLL PIONEER AT PLAYHOUSE IN THE PARK’
“Energetic… super-entertaining… that audience; whooping and wailing, swinging and swaying in their seats…. a rousing homage to a rock ‘n’ roll pioneer”
— David Lyman, Cincinnati Enquirer

‘BUDDY - THE BUDDY HOLLY STORY ROCKS AT CINCINNATI PLAYHOUSE IN THE PARK’
“Whether you grew up bopping along to his music or this is your first Buddy experience, there's something to enjoy for everyone.

“Andy Christopher (Buddy Holly) is a phenomenal talent… (Shayna Nicole Small) arguably stole the show with her genius comedic timing and incredible, soaring voice… The range and power behind her voice is unbeatable.

“In addition to these two standouts, it's important to note that every actor that touches an instrument is playing them full out and with the utmost of skill. Joe Cosmo Cogen, Ryan Jagru, and Spiff Wiegand complete Buddy Holly and The Crickets. If you aren't looking over towards stage right (house left) you'll miss Wiegand doing some hysterical yet crazy impressive tricks with his bass, such as playing it lying down, on his feet, etc.

“Get transported to the 1950s in the prime of rock and roll”
— Anne Simendinger, BWW
Photos by Mikki Schaffner 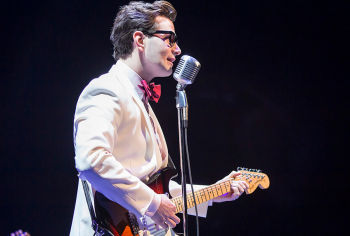 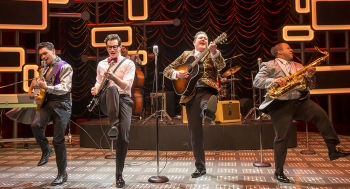 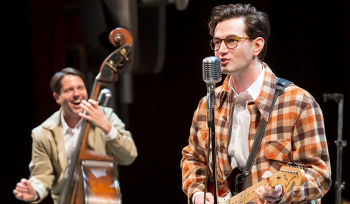 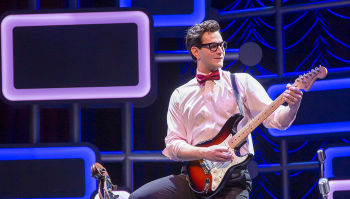 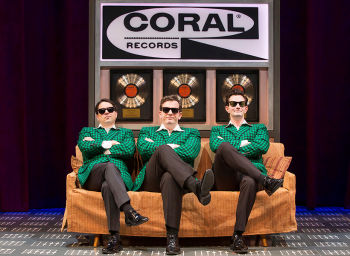 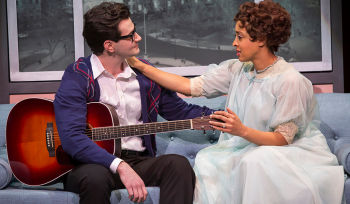 ‘PLAYHOUSE IN THE PARK'S ‘BUDDY HOLLY’ IS A MUSICAL CROWD PLEASER’
“Actor and musician Andy Christopher brings an earnestness to Holly that is nerdy, adorable and downright contagious. Though his performance is upbeat, he doesn’t miss the opportunity to add the nuance of a musician who knows his craft well and is determined to use his superior work ethic to push for his vision to materialize into real success.

“Because the actors in this production play their own instruments live onstage, each song is like its own mini concert. Not only does the band demonstrate excellent technique and mastery of their instruments, but they also each bring a delightful stage presence to their performances — every song is lively and different from the rest. In particular, Spiff Wiegand as Joe B. Mauldin displays some impressive tricks with his upright bass that serve to pepper in extra flair.

“The Playhouse’s Buddy features a supremely cool Midcentury Modern set designed by Christian Boy in his Queen City debut. Though minimalistic in nature, it features strong lines and rounded edges on several tall pieces adorned with images that help set the scene for the late-’50s tale. In fact, the entire set is saturated with retro vibes. From the rich, red velvet curtain to the incredibly handsome Shure 55 microphones, the design oozes vintage cool. Even the floor participates in the theme, displaying a pattern of guitar tablature.

“Buddy is perfect for all ages… the lively performances and fun character work should captivate the young and old. Because Holly’s music is so catchy, and because the actors are so practiced and lively, it’s easy to catch yourself bobbing or clapping along to hit after hit.”
— Jackie Mulay, Citybeat 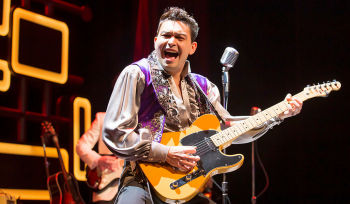 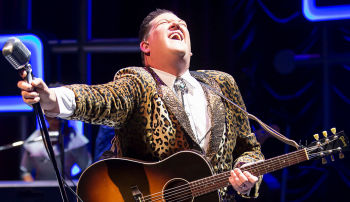 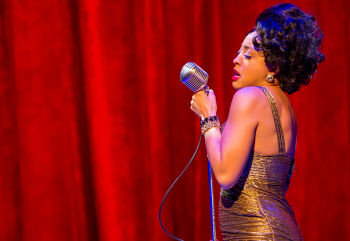 “...a slick and well-performed staging of the show which has audiences dancing in the aisles… very entertaining… sure-handed and well-oiled performances and direction make this a fun night out, and a nostalgic emotional ride”
— Scott Cain, TalkinBroadway.com 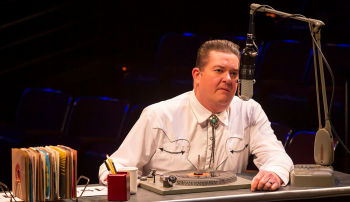 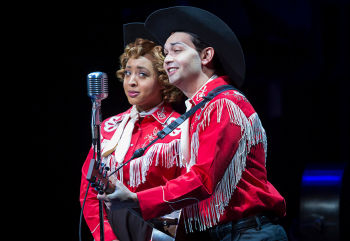 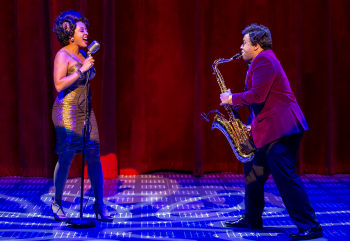 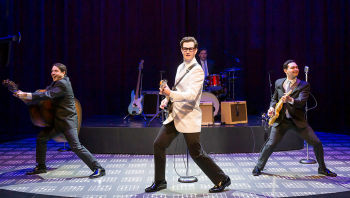