A spectacular cast and production whipped Playhouse audiences into a frenzy over four seriously rocking weeks during summer 2016. Audiences loved the show so much, Buddy returned to Bucks County in 2017 and 2019!
Testimonial:

“Buddy was a big success for us. The audiences were dancing in the aisles, and many patrons told us it was their favorite show they've seen. You just can't beat that music!”
— Josh Fiedler, Producer, New Hope Productions
Photos by Joan Marcus 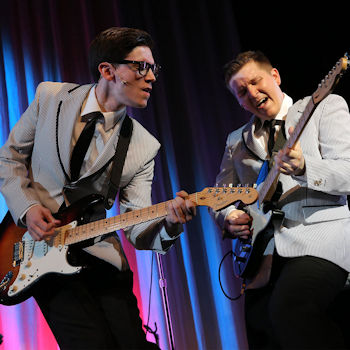 “(T)his show nailed the energy and spirit that is rockabilly. Dewey did an amazing job capturing the essence and originality of Holly, not to mention his own musical and vocal talent. Larson was great; he was amusing to watch with his quirky tricks on the upright bass. Cossman was remarkable on drums. The true talent of the entire cast and crew was amazing. Looking around the theater every head was bobbing, foot tapping, or hands clapping – hiding the real desire to get up out of our seats hearing ‘That’ll be the Day’, ‘Peggy Sue, ‘Why Do Fools Fall in Love’, ‘La Bamba’, and ‘Johnny B. Goode’ among countless others. I forgot at times that I was at a ‘play’ and not at the first white band’s successful show at the Apollo with an eccentric host and singer (Brandi Chavonne Masey) or at the 1959 Winter Dance Party when Holly performed with the Big Bopper (Karack Osborn) and Ritchie Valens (Gilbert D. Sanchez) – that led to the tragedy knowingly referred to as the ‘day the music died’”
- Lauren Hartranft, Phindie 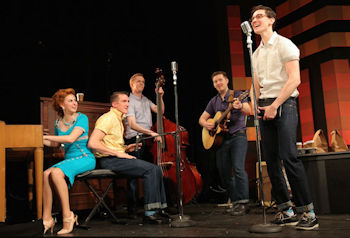 (L-R) Elizabeth Nestlerode, Zach Cossman, James David Larson, Maximillian Sangerman and John Dewey
“Bucks County Playhouse resurrects the amazing talent lost too soon… the never-ending stream of hits keeps the audience tapping their toes for hours.
“With the talented ensemble’s malleability and iconic characters, Hunter Foster’s direction transplants you back to 1959 in a great way. The direct address to the audience puts you in the room where these concerts happen in a magical way.

“While some said that Buddy Holly had “the sex appeal of a telegraph pole,” John Dewey’s magnetism is off the charts in the title role. He sounds, looks, and acts like the late great Mr. Holly, while still showcasing his own incredible musical talent.

“The 11-person cast not only fills all of the countless roles in the show, but are also the live band; almost all play instruments, all while recreating the talent of those that came before. James David Larson (Joe B. Maudlin; bass) and Zach Cossman (Jerry Allison; drums) flesh out Buddy’s band and best friends with musical aptitude and charisma to boot. Maximilian Sangerman (Tommy Allsup, guitar, trumpet) also joins the band, fleshing out the band dynamic with a high energy performance. 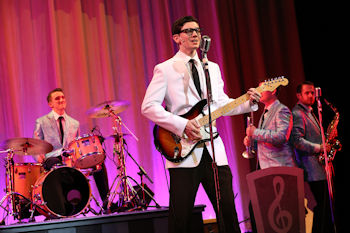 “Choreography by Lorin Lattaro do not distract from the music, while featuring those band and cast members highlighted in specific moments and songs. In a show so driven by music, sound design by Matthew Given puts the audience in a radio studio, the recording studio, and live at concerts through different effects, while continuing to keep the band sounding great.

“Andrew Koch’s beautiful turntable set allows multiple locations in the studio, in the office, on stage, or on the street with minimal changes and multiple drops. This gives a malleable canvas for Gina Scherr’s lighting design. Scherr’s lighting does not just punctuate the music, but amplifies its strength with concert-level bright colored lights, different for each new venue. Costumes by Nicole V. Moody transports the cast back to the 1950s, from Buddy Holly’s classic thick-rimmed glasses, rolled up jeans, and button ups to the girls’ A-line, classic dresses.

“For those who knew of Buddy’s work while he was alive, this is the perfect opportunity to relive the early days of rock ’n’ roll. For those of us who were not so lucky, make your way to Bucks County Playhouse to be transported back to be in the audience a concert with the 1950s greats we lost too soon”
- Rachel Beecher, DC Metro Arts 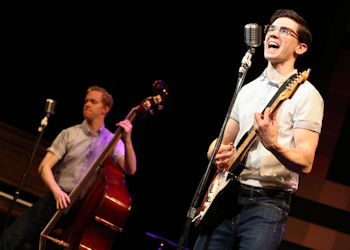 James David Larson as Joe B. Mauldin and John Dewey as Buddy Holly
“A truly great production… Could there be a better Buddy Holly than John Dewey? I don’t think so. The passion of a bespectacled young man in his teens and early twenties, whose youth refuses to believe in boundaries, is perfectly exemplified by the beautifully authentic performance of Dewey… The chemistry between John Dewey and Natalie Haro (as Maria) is tender and nuanced… All are excellent musicians and singers. There is no orchestra in the pit, because all the accompaniment is played by Buddy Holly and the Crickets, which is to say, the cast.
“The sound is not just good, it rocks. The cast loves to play their instruments and you feel it. The vibe is not just acting. They are truly jamming. They are truly rocking. They are playing with it. They are having fun. They are lifting the audience with them. It is raw. It is exciting. And it is great theater… 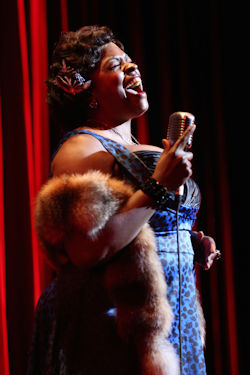 “I would be remiss if I did not say that I admired the sets by Adam Koch, as well as the lighting design by Gina Scherr, and sound design by Matthew Given. The turntable gave smooth transitions from scene to scene.

“In the end, regardless of our knowing that our protagonist dies in a fatal crash, Buddy Holly lives on. Ironically, his group’s name was the Crickets. But is far from the sound of crickets that one hears at the end of the evening at Bucks County Playhouse. One hears the hooting, hollering, applauding and stomping of feet that only true rock ‘n’ roll can produce”
- John Dwyer, New Hope Free Press 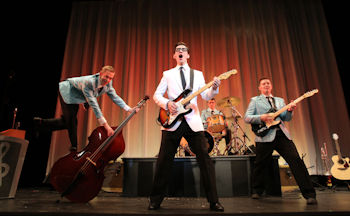 (L-R) James David Larson, John Dewey, Zach Cossman, Maximillian Sangerman
“(An) energetic, talented and engaging cast… John Dewey has the looks, the moves and the voice as Buddy Holly. The Crickets include James David Larson (Joe B. Mauldin), who does some great stunt-playing on the stand-up bass; Zach Cossman as Jerry Allison, the drummer, and Maximillian Sangerman as Tommy Allsupp, guitarist. It’s a tribute to these actors-musicians that they play as a cohesive and entertaining tribute band… Buddy - The Buddy Holly Story will touch your life, too. His story does ‘Rave On’ at Bucks County Playhouse”
- Paul Willistein, Bethlehem Press 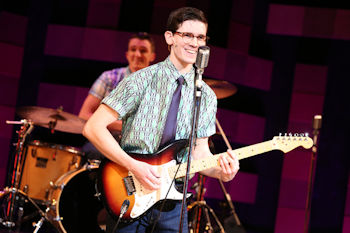 John Dewey as Buddy
“This two act musical, featuring almost two dozen songs by these talented composers and performers is a joyous celebration of their lives and music”
- The Times of Trenton 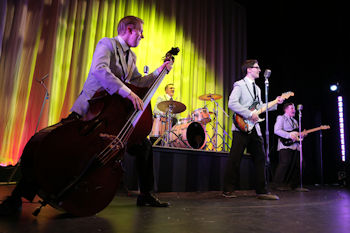 James David Larson, Zach Cossman, John Dewey and Maximillian Sangerman
“The handsome young men who play Buddy and his band mates are fantastic musicians. Zach Cossman as Jerry Allison on drums will make you think that he also worked for the early Diana Ross and the Supremes. He’s got that Motown sound down and it’s vibrant, alive, and kicking. John Dewey looks the part of Buddy Holly. He’s earnest, skinny, and cute. The real surprise is Brandi Chavonne Massey as the Apollo Performer. Her solo brings down the house… For a fresh breeze blowing happiness into your life, see Buddy – The Buddy Holly Story”
- Ralph Malachowski, Out In Jersey 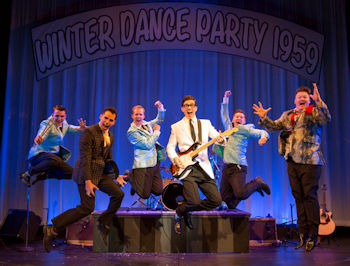 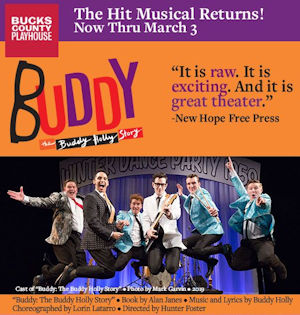 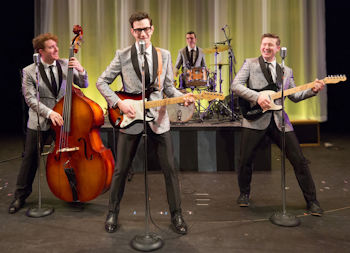 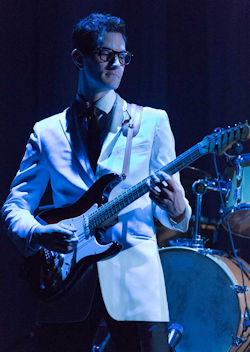 "The Bucks County Playhouse has brought back Buddy — The Buddy Holly Story with some new cast members and it is rocking the house again with a joyful sound. Can I get an “Amen!?”

"Knowing its audience, the Playhouse has tried various other shows to appeal to this demographic that loves rock and roll. It has done so with varying success, after the huge success of this show, both critically and box office-wise, when it first produced back in June 2016.

"Hunter Foster is again at the helm, directing with a relatively new cast. There are some who were in the original and its revivals, but many, including the lead of Buddy Holly, are fresh to their roles. And that is good. There is an excitement that comes with a little bit of uncertainty and being early in a run or process. Rock and Roll, especially, is best served fresh and it is fresh and exciting indeed with Andy Christopher as the idealistic, skinny and bespectacled rocker, Buddy Holly.

"Hipockets Duncan, the disc jockey who pushed Charles Hardin (“Buddy”) Holly at the beginning of his career, is played with Texan charm by Ryan Halsaver. Sky Seals, who was so wonderful as Johnny Cash in last season’s Million Dollar Quartet, plays record producer Norm Petty, as well as band member Murray Deutch. Seals is a fine actor and a great musician.

"Two things make this show an extraordinary experience: 1)... The direction of Hunter Foster, and 2) the exceptional abilities of this very strong cast. To act and sing is one thing, but to have the musicianship to make us believe you are Buddy Holly’s band “The Crickets” means that you are experiencing something very special. The energy that comes off this stage, when they are really jamming, is enough to be the backup for a town power outage. There is an unmistakable joy and it is delicious.

"We have Zach Cossman as Jerry Allison on drums, Matt Cusack as Joe B. Mauldin on bass, and Maximilian Sangerman as Tommy Allsup, playing guitar and trumpet. Skye Seals is on guitar and Brittany Brook Elizabeth (Vi Petty and MD Associate) is on piano. There are 27 songs that are performed by the group including “That’ll Be the Day,” “Peggy Sue,” “Johnny B. Goode,” “It’s So Easy,” “Everyday, “La Bamba” by Ritchie Valens (Gilbert D. Sanchez), and “Chantilly Lace” by the Big Bopper (Adam McDowell).

"From the original cast, we have the extraordinary Brandi Chavonne Massey, who as a performer at Harlem’s Apollo Theater, tears up the stage with the heart throbbing, pulsating, energy driven “Shout.” Diva is a word that will come to mind after hearing this powerhouse.

"We also have the pleasure of Natalie Grace Ortega as Buddy’s wife, Maria Elena. Ortega is a fine actress, whose performance is even more meaningful in a current era of racial and ethnic strife, which Buddy touches on when the all-white band plays the Apollo and when Buddy marries a Latina.

"Buddy Holly is always relevant musically but, in regards to living the American Dream, realizing your aspirations, being inspirational and trying to get beyond race and ethnicity, it is now more needed to see and hear than before."
—John Dwyer, New Hope Free Press 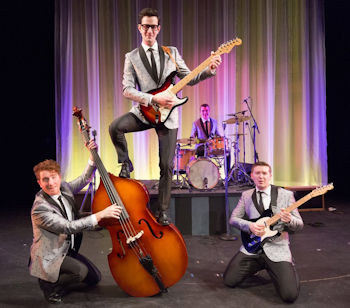 “From beginning to end, Buddy offers non-stop enjoyment, even for theater-goers who may not be as familiar with (the) music”
- Samantha Bambino, Bensalem Times