New York, NY
Bill is a bassist, trombonist, and actor who has played the role of Joe B. Mauldin in many productions of Buddy including in New York, New Jersey, Nevada, California, and also on tour.

Bill is both a bassist and trombonist from New York City. He has played Joe B. Mauldin in multiple productions of Buddy, including the Forestburgh Playhouse (NY), Lyceum Theatre (Arrow Rock, MO), Laguna Playhouse (CA) and on tour. He also plays in a Buddy Holly tribute band, The Rave-Ons!, and is the bassist for The Renegade Kings, a band which covers all forms of Rockabilly music. 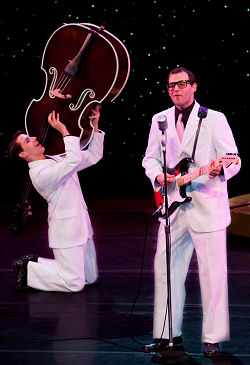 Bill Morey (L) as Joe B. with Todd Meredith

Bill performed at the Surflight Theatre in Beach Haven, NJ, in that company's record-breaking run of the show in 2009. He was also in the 90-minute version of Buddy at the Eldorado Casino Showroom in Reno, NV. Bill performs as a trombonist throughout the East Coast and has performed with big bands, jazz combos, orchestras, brass ensembles, travelling shows, rock bands, and regional theatres. 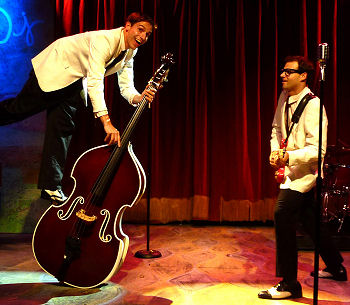 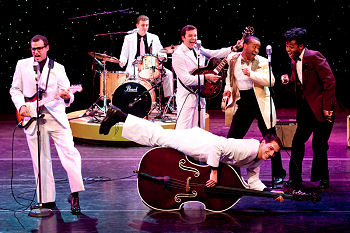 “While all are outstanding, Bill Morey, as bass player Joe Mauldin, does incredible tricks and stunts with his bass”
– Eric Marchese, Orange County Register
“The bass player was a sight to behold. He did more tricks with that bass than Carter’s got liver pills; from playing it upside down, sideways, crossways, you name it, he could do it. His character was Joe B. Mauldin, played by Bill Morey. His unique style was mesmerizing to watch while performing on - or with - the bass, as well as his gripping vocals and lastly, his riveting trombone ability”

“As Cricket Joe B. Mauldin, Bill Morey steals the show with his acrobatic handling of his acoustic string bass by playing while lying down, twirling it and climbing on it, all the while plucking away”
- Marcus Kalipolites, The Times Herald-Record 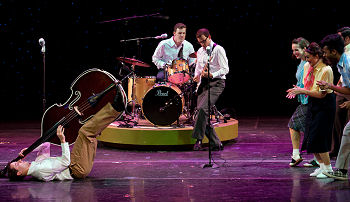 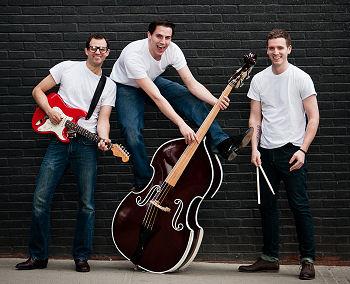