A magnificent production and fabulous run of Buddy in Indianapolis meant Summer 2019 was a hot and rockin' one for Beef & Boards patrons!
Testimonial:

“What a show! I truly hated to see it close. Normally I will watch a show during the rehearsals, then one or maybe two times during the run, but this show kept me coming back to peek through the curtains over and over again. We could have easily run this show another week or two. Our box-office is still getting numerous calls after we closed from patrons asking ‘Is The Buddy Holly Story still playing?’ We had friends or family tell us they loved it, and haven't stopped talking about what a great show it was”
— Sean Stumpf, Director of Operations, Beef & Boards Dinner Theatre, Indianapolis, Indiana 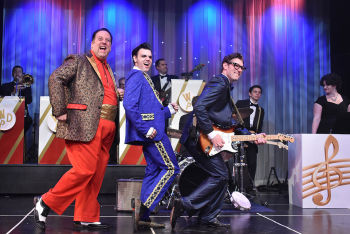 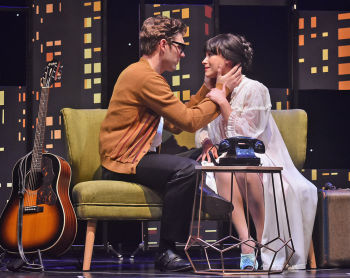 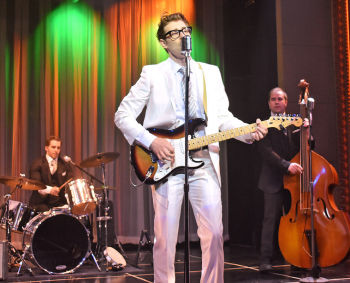 “What an outstanding display of talent and energy is offered here by every cast member!...

“Directed by Jeff Stockberger, Buddy features a full roster of talented musicians and vocalists. Kyle Jurassic takes the title role… shows a tremendous understanding of the man – whose quiet nature in private is coupled with a fierce drive for self-expression and a charismatic stage aura. Jurassic knows how to rock the house, and does so in song after song with an energetic force in both his Holly-mimicking vocals and his fine guitar work… Buddy Holly truly comes alive in Jurassic’s performance on the B&B stage…

“The supporting cast is rife with accomplished players and singers. Edward LaCardo does an impressive high octane rendering of “La Bamba” as Ritchie Valens. Chuck Caruso is superb as The Big Bopper (J.P. Richardson), offering an authentically slick version of the Bopper’s hit, “Chantilly Lace”. In the Apollo Theatre scene, Tarra Conner Jones blows the roof off as Mama Pearl in her rendition of “Shout”, with a tremendous and lively accompaniment by Joshua L.K. Patterson. James Daley on bass and Josh McLemore on drums form Holly’s band – The Crickets, along with guitarist Christopher Tucker. This trio crushes the Buddy Holly catalogue with absolutely dynamic presentations.

“The undeniable high point of the show is the second act finale, where the entire cast portrays the final fateful Holly/Valens/Bopper appearances at Clear Lake, Iowa. Consisting of 10 musical numbers, we are entertained with a concert-like event, in which we get to see and feel the unbound talents these noted performers gave to their audience. It’s crazy-good!

“On the more technical side, Kristy Templet provides the exceptional musical direction, Michael Layton devises a clever scenic design, Ryan Koharchik’s lighting ideas are perfect, and Jill Kelly Howe once again knocks it out of the park with her costume designs…

“This show is a rousing portrait of one of the great rock ‘n’ roll pioneers. The standing ovation for these performers was well-deserved.”
— Ken Klingenmeier 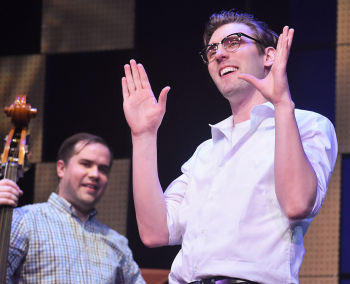 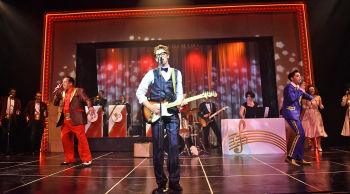 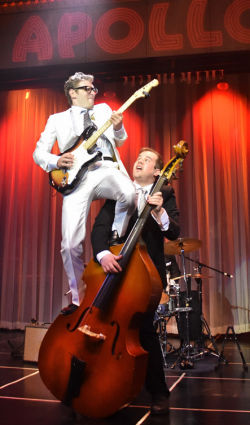 “Holly is played by Kyle Jurassic, making his debut at Indy’s immensely popular dinner theater venue. Jurassic is no stranger to this role as he has held the title role prior to this production… He has devoted much time to learning about what kind of man Holly was, and this adds a flavor of authenticity to his portrayal of the man with the glasses.

“Chuck Caruso plays the Big Bopper and Edward LaCardo is Ritchie Valens. Both do a great job portraying the characteristics of these iconic performers. Josh McLemore is outstanding as drummer Joe Mauldin. James Daley shows you things you never thought were possible when playing the bass as Jerry Allison. Beef & Boards favorite Sarah Hund shows off not only her voice but her fiddle playing as well. All supporting actors and musicians add to the incredible talent offered to the audience in the show.

“Of special note is the immensely powerful voice of Tara Conner Jones as Mama Pearl, lead singer at the Apollo Theater in New York. Her electrifying version of “Shout” brings the house down.” 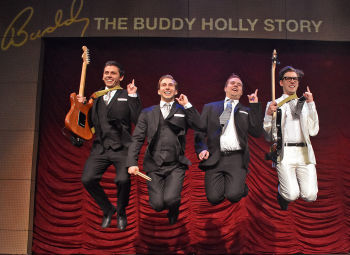 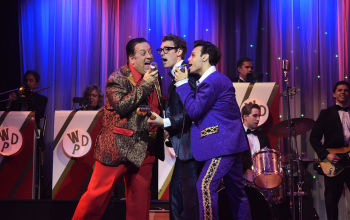 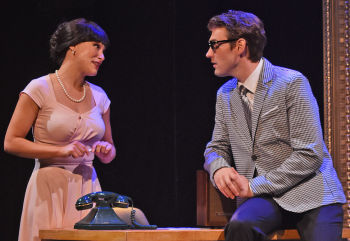 “Beef & Boards once again hits the nail on the head… the set and costumes felt like bright indicators of a vibrant post-war optimism, and I felt like I was literally in a time machine. Buddy was played with cheeky polish by Kyle Jurassic. Holly's musical geekiness (spawning generations of uber-hip heavy glasses-wearers) and determination to record his way to the top really came across perfectly from Jurassic's performance, and his guitar playing was skillful…

“Much like other musicals based on singer-songwriters, there are some really good moments when the audience sings or hums along almost like a lullaby. Packed with extremely rip-roaring numbers delivered with consistent energy, Buddy - The Buddy Holly Story at Beef & Boards is a great night out… and is still able to pay respect and homage to his untimely death.

“Watching this show was like watching a concert from the ‘50s come to life. There were exceptional guitar riffs, balancing on basses, and a personal favorite (for obvious reasons) was the quirky and oft-forgotten celeste…

“One of my favorite parts was the scenes in the Apollo Theatre. It served to remind us how much music can bring us together… There was no band or pit orchestra to fall back on, so Kyle Jurassic got the chance to show off his raw talent and guitar skills…

“His loss and the loss of his compatriots was a true tragedy, but this musical stands as a moving tribute to all he was able to accomplish.” 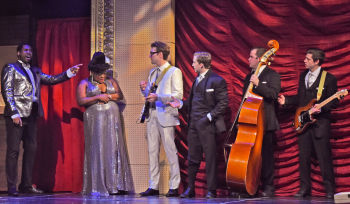 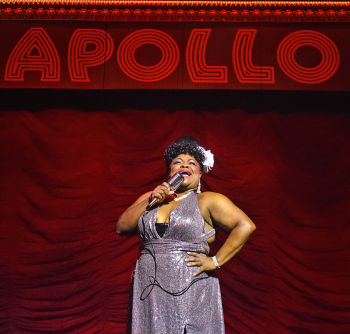 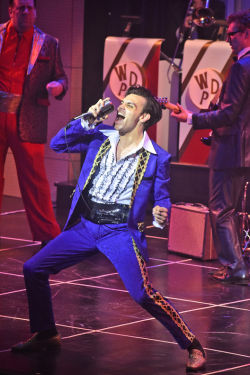 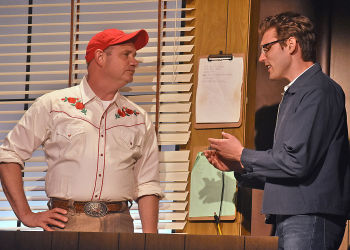 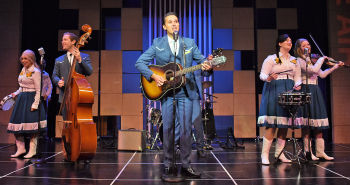 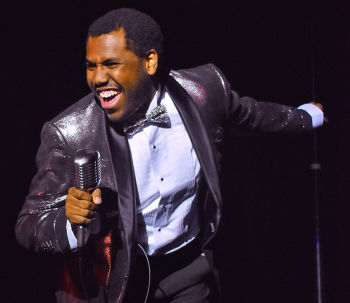 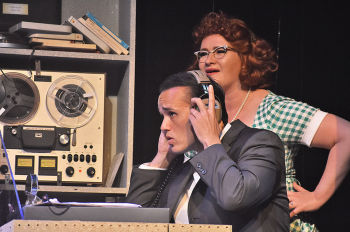 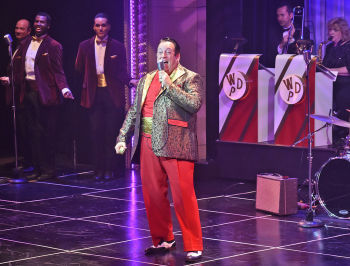 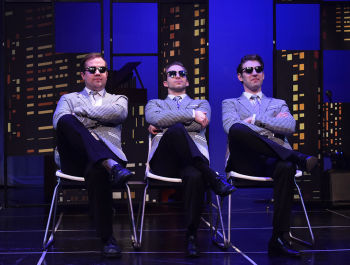